Despite being less accurate on ImageNet, adversarially robust neural networks match or improve on the transfer performance of their standard counterparts.

How can we improve transfer learning?

Prior works suggest that accuracy on the source dataset is a strong indicator of performance on downstream tasks.

Still, it is unclear if improving ImageNet accuracy is the only way to improve performance. After all, the behavior of fixed-feature transfer is governed by models’ learned representations, which are not fully described by source-dataset accuracy.

These representations are, in turn, controlled by the priors that we put on them during training.

Adversarial robustness refers to a model’s invariance to small (often imperceptible) perturbations of its inputs.

where $\theta$ is the model parameters, $\mathcal{L}$ is loss function, and $(x, y) \sim D$ are training image-label pairs.

Robust models match or improve on the transfer learning performance of standard ones.

In this section, we take a closer look at the similarities and differences in transfer learning between robust networks and standard networks. 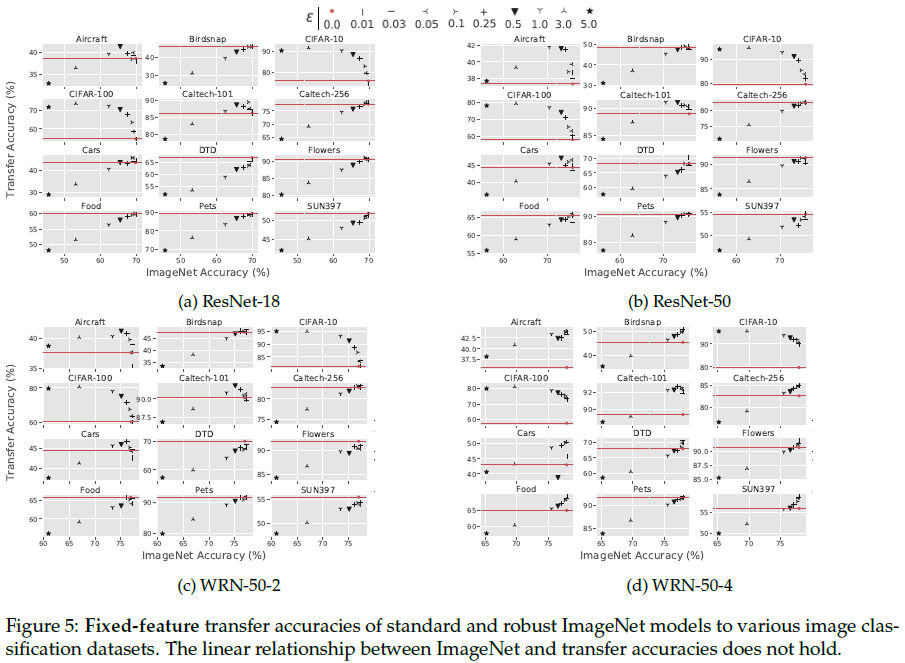 Also, they find that when robustness level is held fixed, the accuracy-transfer correlation observed by prior works for standard models holds for robust models too. Table 2 shows that for these models improving ImageNet accuracy improves transfer performance at around the same rate as standard models.

⇒ Transfer learning performance can be further improved by applying known techniques that increase the accuracy of robust models. Accuracy is not sufficient for measuring feature quality or versatility. But we don’t know why robust networks transfer well for now.

Authors observe that although the best robust models often outperform the best standard models, the optimal choice of robustness parameter $\epsilon$ varies widely between datasets. They explain that this variability of optimal choice might relate to dataset granularity. They hypothesize that on datasets where leveraging finer-grained features are necessary, the most effective values of $\epsilon$ will be much smaller than for a dataset where leveraging more coarse-grained features suffices.

Although we lack a quantitative notion of granularity (in reality, features are not simply singular pixels), authors consider image resolution as a crude proxy. They attempt to calibrate the granularities of the 12 image classification datasets used in this work, by first downscaling all the images to the size of CIFAR-10 (32 x 32), and then upscaling them to ImageNet size once more. They then repeat the fixed-feature regression experiments from prior sections, plotting the results in Figure 7. After controlling for original dataset dimension, the datasets’ epsilon vs. transfer accuracy curves all behave almost identically to CIFAR-10 and CIFAR-100 ones.