ImageNet-trained CNNs are strongly biased towards recognising textures rather than shapes, which is in stark contrast to human behavioural evidence and reveals fundamentally different classification strategies.Authors then demonstrate that the same standard architecture (ResNet-50) that learns a texture-based representation on ImageNet is able to learn a shape-based representation instead when trained on ‘Stylized-ImageNet’, a stylized version of ImageNet.

→ ImageNet-trained CNNs are concentrate on texture and this could be solved by Stylized-ImageNet.

Concentrating on shape rather than texture is much better fit for human behavioral performance and has benefits such as improved object detection performance and robustness toward a wide range of image distortions.

In this work authors aim to shed light on this debate with a number of carefully designed yet relatively straightforward experiments.

→ These experiments provide behavioral evidence in favor of the texture hypothesis: A cat with an elephant texture is an elephant to CNNs, and still a cat to humans.

Beyond quantifying existing biases, authors subsequently present results for our two other main contributions: changing biases, and discovering emergent benefits of changed biases. They show that the texture bias in standard CNNs can be overcome and changed towards a shape bias if trained on a suitable dataset. Networks with a higher shape bias are more robust and reach higher performance on classification and object recognition tasks.

It is important to note that the Authors only selected object and texture images that authors are correctly classified by all four networks.

Images generated using iterative style transfer (Gatys et al., 2016) between an image of the Texture data set (as style) and an image from the original data set (as content). The authors generated a total of 1280 cue conflict images (80 per category), which allows for presentation to human observers within a single experimental session. 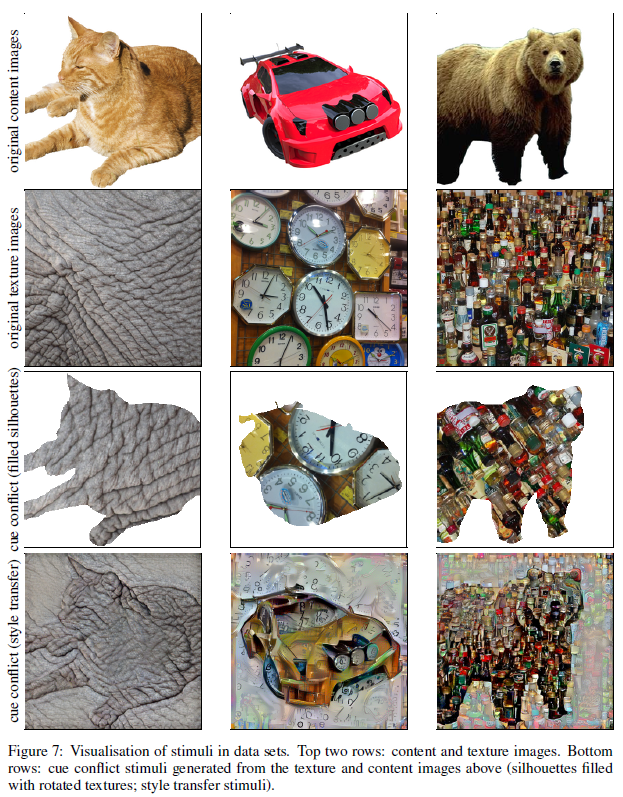 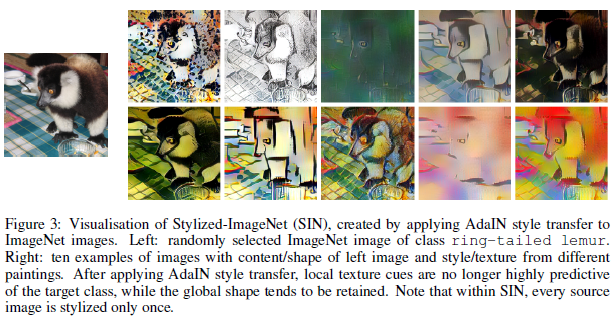 Starting from ImageNet authors constructed a new data set (termed Stylized-ImageNet or SIN) by stripping every single image of its original texture and replacing it with the style of a randomly selected painting through AdaIN style transfer (Huang & Belongie, 2017) (see examples in Figure 3) with a stylization coefficient of \(\alpha\) = 1.0.

Styled-ImageNet is produced in different way with Cue Conflict task

Texture vs Shape bias in humans and ImageNet-trained CNNs 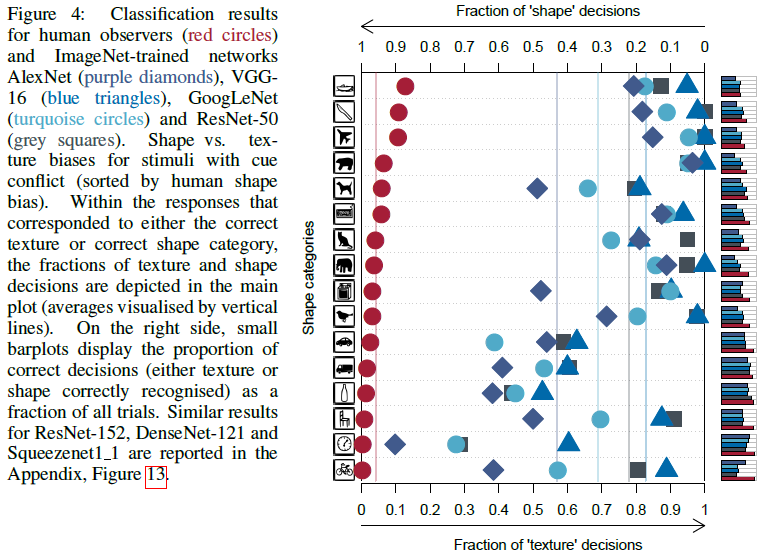 ImageNet can be solved to high accuracy using only local information. In other words, it might simply suffice to integrate evidence from many local texture features rather than going through the process of integrating and classifying global shapes.

Overcoming the texture bias of CNNs 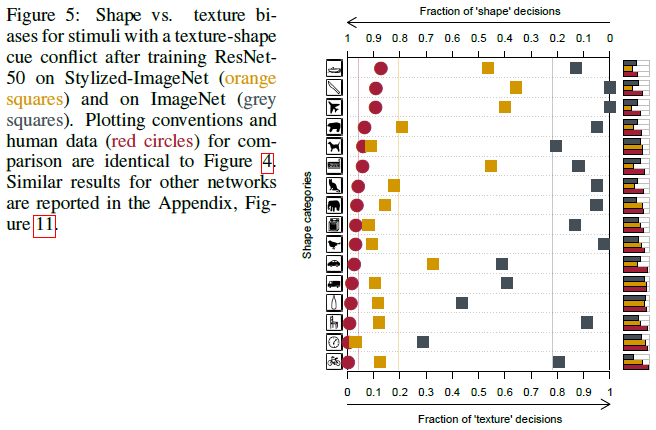 The SIN-trained ResNet-50 shows a much stronger shape bias in our cue conflict experiment (Figure 5), which increases from 22% for a IN-trained model to 81%. In many categories, the shape bias is almost as strong as for humans.

Does the increased shape bias, and thus the shifted representations, also affect the performance or robustness of CNNs? In addition to the IN- and SIN-trained ResNet-50 architecture authors here additionally analyse two joint training schemes:

Authors compared these models with a vanilla ResNet-50 on these three experiments: 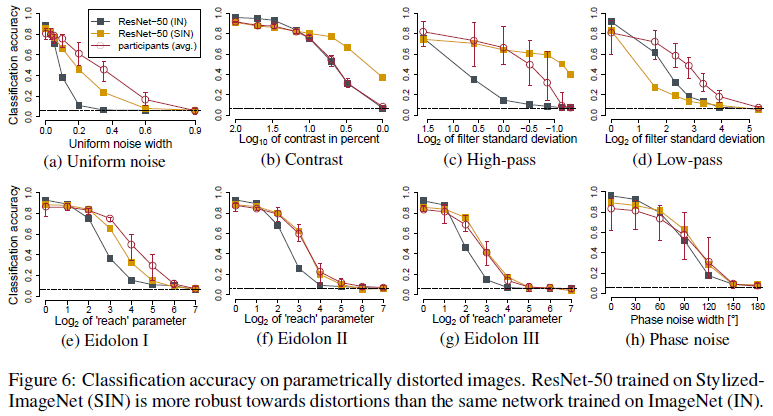 The robustness just could be from data augmentation?